A dream ride for Grandpa

A dream ride for Grandpa

Age has no limit when it comes to riding.

Bull Falls customer Holly Corso-Fons learned this when she teamed up with a few friends to help make her 99-year-old grandfather’s dream getting back on a Harley-Davidson a reality this summer.

“My Grandpa Tony and I have something in common that we love the freedom we feel when we are on the open road,” said Holly. “He used to own and ride a Springer Harley-Davidson in his younger years and to this day he loves talking about how he rode his bike every day to Kenosha to work and how much he loved riding overall.”

As the only one in her family who now rides, Holly became determined to surprise Grandpa Tony on his 99th birthday this past August by taking him on a ride. She called a friend, Steve Johnson, who owns a bike with a sidecar. While he was busy that day, he told Holly she could use his bike. “I truly felt honored at that moment when he said he trusted me to that degree, especially knowing I have never driven a sidecar in my life.”

On the day of the ride, two of Holly’s friends met her at the assisted living facility where her grandpa resides to help. One friend came along to escort them and the other came to take photos. After knocking on Grandpa Tony’s door, Holly revealed the surprise. “I got something cool waiting for you,” she said. “Do you want to go for a ride to the casino? I have a motorcycle outside for you. He couldn’t believe what he was hearing. It was truly priceless.”

After being taken by wheelchair to the motorcycle, old habits came quickly back to Grandpa Tony. “Once I put his help on and put the helmet down, he knew exactly what to do,” she said. “He made himself comfortable and away we went for a nice ride to the casino. We had a beautiful ride and sharing the road with him was truly one of the most beautiful experiences I’ve ever had.”

Holly said Grandpa Tony can’t wait to do it again when he is 100. “It’s amazing that you truly never forget that feeling that you get when you are on the bike even at 99 years of age,” she said. Click here to see video footage of Grandpa Tony's ride. 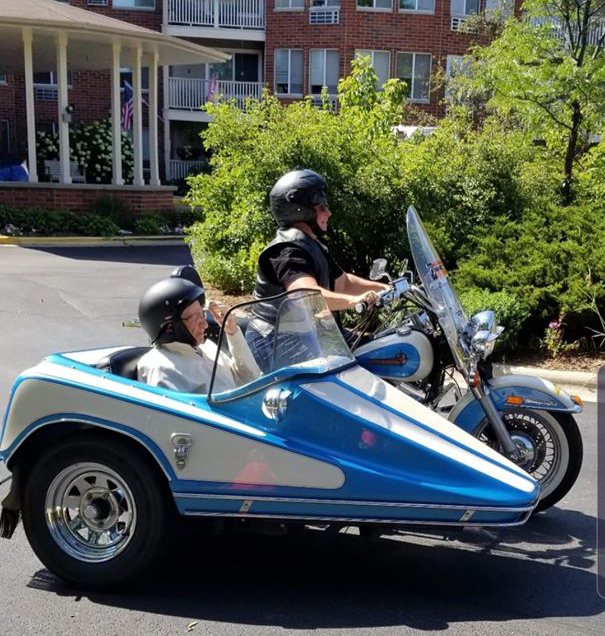